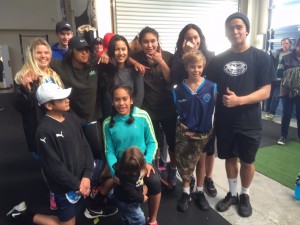 After a successful day!

Organised and managed by Nga Taiatea Wharekura and held at Te Kotahitanga Gym in Frankton it was a very exciting and successful day for all the students. There seemed to be a heightened feeling of expectation in the air as the day progressed with individuals and teams putting in some outstanding efforts. What made it more exciting was the close tussle between Raglan and Nga Taiatea.

A very professional Tai Wananga crew took out the top prizes both in the teams and individual standings as expected. They are dedicated crossfit athletes who train everyday and regularly attend competitions. One of their girls is actually the reigning world champion in her age group. Raglan and Nga Taiatea teams are made up of or best and fitest students all of whom play many different sports.

The real competition came down to a very close fought battle between Nga Taiatea and Raglan for the minor placings. In the end it was a tie with Nga Taiatea’s two teams finishing fourth and seventh and Raglan’s two finishing in fifth and a sixth places.

It was fantastic to see the local raglan supporters turning up in numbers to support their children. There were even the nannys were there screaming for their moko!