Shakespeare’s Othello at the Pop Up Globe in Auckland

Last Thursday 4th May, six students from our combined Year 9-10 English class went to Auckland to see Shakespeare’s Othello at the Pop Up Globe. At 11.30am, Bayley, Josef, Karewa, Arikitauri, Te Haeata and Manon, piled into Whaea Lizzy’s Toyota Wish and headed off to the City of Sails.

On the way we stopped for Maccas at Mercer, but some people chose a more nutritious option. With plenty of time to spare, and some confusing advice from Aunty Google we arrived at The Globe Theatre next to Ellerslie Race-Course.

We were all impressed by the replica 400 year old theatre, which is round (like a globe), has no ceiling in the centre and reminded us of a palace.

Once inside, some of the cast were already playing medieval music which ‘gave a chill and welcoming vibe’. Our Groundling tickets, really were ‘standing only’ as the nice volunteer lady explained when we tried to rest our tired teenage legs on some of the many spare ‘rich people’ seats.

For the rest of the show we stood right in front of the stage, so close that Bayley had wine poured on him. In the final scene, Iago (the baddie) died centimetres from our faces, before being raised to the ceiling, upside-down by a chain. That was our best bit.

“This is really different to the movie!”

“It was cool to see the actors interact with the audience.”

“The costuming was so realistic I thought I was back in the 17th Century…Especially Desdemona’s undergarments!”

“My favourite was the special effects: candles, fireworks, live musicians and fake blood.” Not bad for 400 year old technology.

With some lucky rush hour traffic, we headed back to Whaingaroa with a dinner stop at Bombay. Whaea got us all home safely by 9pm. It was an unforgettable day. 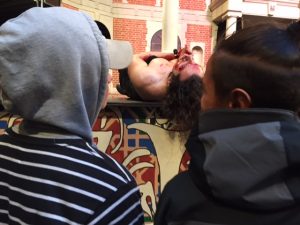 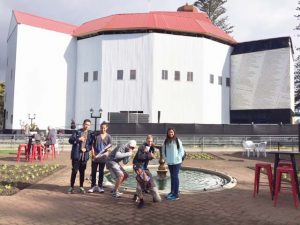 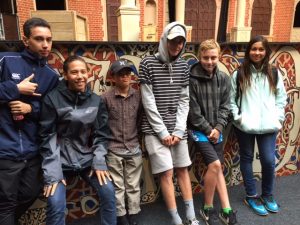